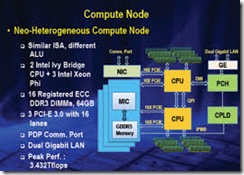 China has built the world's fastest supercomputer, which is almost twice the speed of the previous record-holder from the US DoE’s Titan super computer.
In a massive escalation of the supercomputing arms race, China has built Tianhe-2, a supercomputer capable of 33.86 petaflops — almost twice as fast as the US Department of Energy’s Titan, and topping the official Top 500 list of supercomputers by some margin. The US isn’t scheduled to build another large supercomputer until 2015, suggesting China will hold pole position for a long time to come. The computer has 32,000 Ivy Bridge Xeon CPUs and 48,000 Xeon Phi accelerator boards for a total of 3,120,000 compute cores, which are decked out with 1.4 petabytes of RAM. And of course the operating system is Linux. 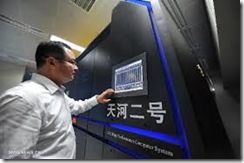 Tianhe-2 marks the second time a Chinese machine has been a world-beater. Tianhe-1 grabbed the top spot in November 2010 before relinquishing it 6 months later to Japan's K computer. China's second ascent demonstrates the country's sustained commitment to funding high performance computing, says Jack Dongarra, a computer scientist at the University of Tennessee, Knoxville, who closely follows international supercomputing trends. "It shows no signs of changing, only increasing," Dongarra says about China's investment in supercomputing.

The Tianhe-2 has been developed by the National University of Defense Technology in central China's Changsha city and is capable of 33,800 trillion calculations per second.