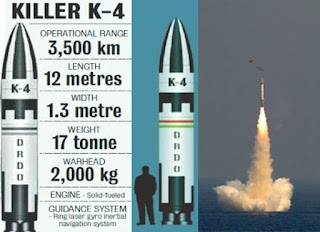 Nuclear-capable ballistic missile K-4 was test-fired from nuclear submarine Arihant, both of which have been ingeniously developed.
In a major step towards completing India’s nuclear triad, nuclear-capable ballistic missile K-4 was test-fired from nuclear submarine Arihant, both of which have been ingeniously developed, officials said on April 13, 2016. Former Indian Navy chief Admiral Arun Prakash (retd) called it a “major step”, but said Arihant needs to be armed with a missile of inter-continental range, which is a missile with above 5,000 km range. The K-4 has a range of 3,500 km.
The test was conducted secretly last month and kept under wraps with the Defense Research and Development Organization refusing to comment on it officially. Admiral Arun Prakash called it a major step towards completing the nuclear triad. “It is a major step towards attaining inter-continental range deterrence to make full use of Arihant,” he told IANS. “We need a missile of about 5,500 km range, then it will enable the submarine to be anywhere in the Indian Ocean and still be a threat to the targets,” he said. “This is major step but not he ultimate target,” the former navy chief said. Sources told IANS that the test was conducted on March 31 from Arihant in the Bay of Bengal, and it was successful.
The DRDO was, however, tight-lipped over the test. The K-4 is part of the K-family of missiles, a series of submarine-launched ballistic missiles (SLBM), named after former president and scientist A.P.J. Abdul Kalam. The missile can carry a warhead weighing up to 2 tonnes and is powered by solid rocket propellant. The missile was developed specifically for Arihant, as the nuclear capable Agni-III could not be compacted to fit in the submarine. Arihant has a 17 metre diameter hull. K-4, along with the smaller K-15 Sagarika, another ingeniously developed nuclear capable missile, will arm Arihant, the submarine, which will complete India’s nuclear triad. Arihant has four vertical launch tubes, which can carry 12 K-15 missiles or four larger K-4 missiles.
sorce : http://www.india.com/education/india-tests-n-capable-k-4-missile-from-arihant-1568627/