Trying to lose weight? Potatoes are not your enemy; here are 6 reasons why you should eat them 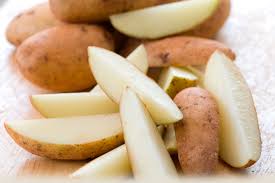 How many times have you heard people saying that if you are on diet you should avoid potatoes? Time and again there have been cries to ditch the carbs and the poor potatoes have been shunned almost as badly as bread! However, as surprising as it may sound, potatoes are and can be very beneficial to your health, if only you know the right way to have them and as long as your overall calorie count doesn’t go up. This does not mean you can immediately tear open that packet of chips – no, that still has to stay well away from your reach. We’re talking about the vegetable in it’s non-oily, non-greasy form.The potato isn’t inherently bad and it shouldn’t be treated as such. However, when potatoes are smothered in cheese, mashed with mayo and doused in sour cream or deep-fried, it loses its good properties. In case you’re still wondering what these positives are, here we list out six reasons why you should include a healthier preparation of potatoes in your diet:
1. Good for people with high blood pressure: While cooking, it’s common to peel off the potato skin and throw it away. But that’s where we go wrong. Not many know of that the potato skin is very beneficial to people suffering from high blood pressure. The skin is loaded with potassium and plays a crucial role in lowering BP. One large spud baked with the skin on, contains at least 1,600mg of potassium, nearly half the recommended amount for an entire day and almost four times as much as a medium banana.
2. Good source of vitamin C: Think of vitamin C, think of potatoes. Really! Do you know that one medium-sized potato has 45 per cent of your daily requirement of vitamin C? Not only is vitamin C essential for boosting your immunity system, studies also show that having adequate amounts of vitamin C can keep stress levels at bay by stopping the secretion of stress hormones.
3. Aids in weight loss: Yes, you read that right. While trying to lose weight, potatoes should be one of your main foods. Because of the fibre content in its skin, not only potatoes help in keeping your heart healthy and improves digestion. Also, if eaten the right way, it helps in losing weight. To get more health benefits from the skin, try topping it with broccoli and salsa.
4. Potatoes are fat-free, sodium-free and low in sugar: Contrary to popular belief, potatoes are low in sugar and sodium, and do NOT contain any fat – a medium-sized one, that is! Also, one medium-sized potato contains about 1g of sugar. But if you fry that innocent potato and top them with loads of unhealthy fat and salt, it surely is bad diet food.
5. Loaded in manganese: You might be less familiar with this nutrient but that doesn’t mean you don’t need it. Manganese plays an essential role in processing protein, carbs and cholesterol and may also be involved in bone formation. One large potato with its skin contains 33 per cent of your recommended daily amount of manganese.
6. Rich in vitamin B6: This vitamin does much of its work “behind the scenes”, and aids in producing essential brain hormones. With 46 per cent of your daily recommended B6, a potato, with the skin on, is a good place to start.